One day in early 2017, Chris Christie was in his kitchen in New Jersey, eating dinner with his wife Mary Pat. The phone rang. It was the president.According to Christie, Donald Trump tried, not for the first time, to persuade the governor to become his labor secretary. Then talk turned to Christie’s firing as Trump’s transition chairman in November 2016.

Christie gives his side of the conversation in his new book, Let Me Finish, a copy of which was obtained by the Guardian two weeks before publication. He says he bristled at Trump’s claim, then rebuked the president.

I’m a big boy who understands how the way this business works … don’t ever, ever tell me again that I wasn’t fired

“I’m a big boy who understands how the way this business works,” he said. “But please, sir, don’t ever, ever tell me again that I wasn’t fired.”

Christie was fired, by then senior aide Steve Bannon in his office at Trump Tower. Christie depicts the scene in withering detail, saying Bannon blamed the move on Jared Kushner, “the kid”, Trump’s son-in law and adviser who is portrayed as the chief villain of the piece, driven by a decade-old family feud.

But the remark Christie reports Trump making brought back to attention a frequently observed feature of the billionaire’s presidency: the man whose TV catchphrase, “You’re fired!”, did much to propel him to power does not like firing people himself.

Famously, Trump fired his secretary of state, Rex Tillerson, and chief of staff, Reince Priebus, by tweet, the same medium by which he announced the “retirement” of Jim Mattis, attempting to steal the thunder of the defense secretary’s resignation.

James Comey, director of the FBI, was fired by letter. Jeff Sessions, the man who got the job Christie really wanted, attorney general, was hounded by tweet for months until he gave in and resigned. After very public power struggles with Kushner, Ivanka Trump and others, Bannon reached an exit agreement with the chief of staff, John Kelly, whose own departure turned into a drawn-out soap opera which has not yet ended with the appointment of a permanent replacement.

In her own book, the former reality TV star and presidential aide Omarosa Manigault Newman reported being fired by Kelly. She then released a taped phone call in which Trump said “nobody even told me about it” and added: “You know they run a big operation, but I didn’t know it. I didn’t know that. Goddamn it. I don’t love you leaving at all.”

Though Christie uses his book to describe his close relationship with Trump and to continually praise his leadership, the president he depicts seems in thrall to powerful family members who make the big decisions.

On the day of the firing of Trump’s campaign manager, Corey Lewandowski, Christie says, he visited Trump in his office at Trump Tower to be told: “They fired Corey, you know. I don’t know if it’s the right thing or not.”

Christie then writes that he and Trump watched the fired aide stay loyal in a TV interview. The candidate approved and suggested he and Christie should call him.

Didn’t we just fire him?” Christie asked. Lewandowski then called him and blamed Kushner for his downfall.

Christie writes that the departure of Lewandowski’s successor, Paul Manafort, was also engineered by Kushner, in part due to a plagiarism scandal over Melania Trump’s speech to the Republican convention.The theme of Christie’s book is that if he had not been fired, the transition would have set Trump up for success. He cites the departures of the health secretary, Tom Price, the EPA administrator, Scott Pruitt, and others as evidence for his claim.

Regarding Comey and the national security adviser, Michael Flynn, Christie portrays protracted debates about the fate of each man, and in each case writes that Kushner’s instincts, which won out over his, proved wrong.

Christie approves of the firing of Flynn, calling him a “slow-motion car crash” whose appointment was an indictment of the Christie-less transition. He also mocks Trump and Kushner’s belief that the move would stop all talk of improper links to Moscow.

“This Russia thing is all over now,” he quotes Trump as saying over lunch with Kushner at the White House in February 2017, “because I fired Flynn.”

“I started to laugh,” Christie writes.’ 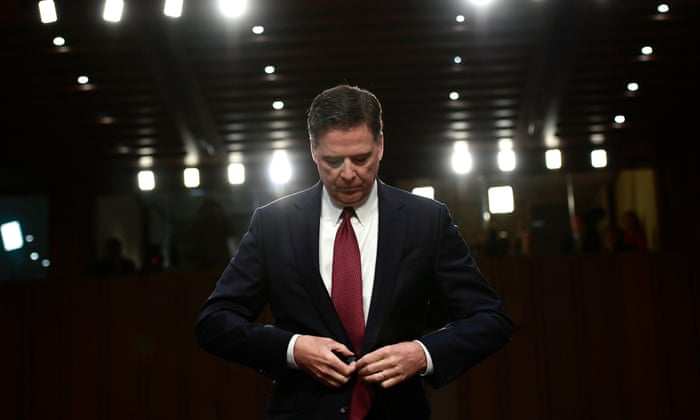 Of Comey, Christie says “there were lots of reasons” to fire the FBI director. “But when it was done and how it was done was abysmal and caused unnecessary grief for the president.”Trump’s chief of Oval Office operations, Keith Schiller – another no longer by Trump’s side – was sent to FBI headquarters in Washington to deliver the necessary letter. Comey, it turned out, was delivering a speech in Los Angeles. He learned his fate from TV.Christie writes that he agrees – a rare occurrence – with Bannon, who has called the firing, which led to the appointment of special counsel Robert Mueller, the worst mistake in modern political historyDescribing his beef with Kushner, meanwhile, Christie cites a TV classic. Trump’s son-in-law, he says, regularly sought to undermine the governor’s work by calling it “‘a Jersey operation’, as if the Trump transition team were a wholly owned subsidiary of The Sopranos.”

Despite his reluctance to personally confront those he wished to get gone, Trump seems to have liked the reference to the seminal series about a ruthless mob boss unafraid to shoot, garrotte or dismember those with whom he wished to dispense.

“One day when I was speaking with Donald,” Christie writes, he used Jared’s exact phrase. ‘It’s a Jersey operation,’ Donald said to me.”

“I flinched at that,” he writes.

NARRATIVE DESTROYED: Trump Shocks Reporters When Asked About 2020 Dem Buttigieg And His Husband

Trump’s SOTU Speech Got BLOWOUT Ratings, And The Media Can’t Be Happy

Chicken Ala Clinton: Hillary Backs Out Of Event After Being Torched By Tulsi

This Is CNN: Guest Has INSANE Conspiracy Theory About ‘Send Her Back’ Chant

Mueller failure to have Trump testify would be a mistake – Schiff

JUST IN: We Finally Know Who Carried Out The Sri Lanka Terror Attack, But The Media Is SILENT

We Must Support the American Pipeline Build-Out

Trump BLISTERS Comey On Twitter After IG Report Is Released