The leader of Venezuela’s newly energized opposition, Juan Guaidó, has summoned fresh street protests and reached out to China and Russia as he intensified his campaign to force Nicolás Maduro and his “arrogant” dictatorship from power.

In his first public appearance since declaring himself Venezuela’s interim president on Wednesday, the 35-year-old politician urged citizens to take to the streets and step up their battle against the man he dubbed “El Usurpador” (The Usurper).

A new round of demonstrations would be held next week, with the exact date and locations to be announced on Sunday, Guaidó said on Friday.

“In Miraflores [the presidential palace] they think this movement will deflate, that we will grow tired. But nobody here will tire, nobody will give in. Venezuela has awoken and it will never fall asleep again,” Guaidó declared.

During a 30-minute address to a sea of supporters who had gathered in a square in eastern Caracas, Guaidó renewed his calls for the military to abandon Maduro.

“We are extending our hand … come with us, because there is a future. Maduro doesn’t protect anybody, not from persecution, not from hunger, not from poverty.”

So far those calls have gone largely unheeded, with Venezuela’s defense minister and other senior military leaders declaring loyalty to Maduro. “There is an ancient saying: ‘If you want peace, prepare for war,’” he said.

At a press conference in the presidential palace, Maduro accused the US of seeking to remove him from office with a coup and ordered his armed forces to prepare to “defeat any imperialist enemy who dares to touch our soil”.

“Nobody wants [war]. But we will not surrender or betray our country if there is an armed conflict, be it localized, low-level, mid-level, high-intensity, generalized, in one region or a city,” said Maduro, promising to resist what he called efforts to transform Venezuela into a second Libya. 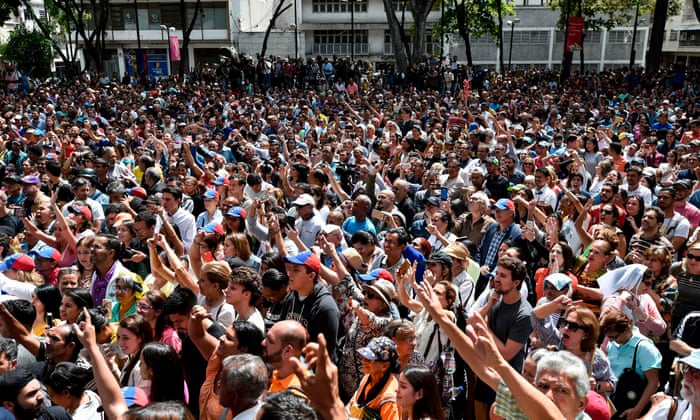 He concluded his address with a swipe at the White House. “Trump, Pompeo, Bolton, Pence: how are you, my friends?” Maduro said sarcastically in English.

During his address, Guaidó also boasted of the widespread international backing he had received, reading a long list of governments which had recognized him including those of the United States, Brazil and Colombia.

“A round of applause for the EU!” Guaidó shouted, although the bloc has yet to explicitly back him as interim president.

Guaidó claimed “the entire planet” was backing his movement to end Maduro’s “dictatorship”.

But there are two crucial exceptions: Russia and China, which both have massive military and economic interests in Venezuela, and have thrown their weight behind Maduro.

On Friday Guaidó said both countries would be welcome in the new post-Maduro Venezuela he was trying to build.

However, Moisés Naím, a Venezuela specialist from the Carnegie Endowment for International Peace, said neither Moscow nor Beijing were likely to turn on Maduro, who came to power in 2013 and has led his country into economic collapse.

Russia would be loth to relinquish a “trophy” foothold in an oil-rich nation that is only a two-and-a-half-hour flight from Miami. China’s financial interests are also too great.

“The moment [Beijing says] they do not think Maduro is the legitimate president of Venezuela – that phrase will cost them $65bn,” he said, referring to the vast debt racked up under Maduro and his predecessor, Hugo Chávez.

“My main concern is that Venezuela becomes a football in this game between powers, where the interests of Venezuelans become secondary.”

In a surprise move on Friday, the US secretary of state, Mike Pompeo, named Elliott Abrams, a veteran of Reagan-era cold war policy in Latin America, as special envoy for Venezuela, saying he would accompany Pompeo to a special UN security council session on Venezuela on Saturday, and travel to the region soon.

Abrams, who noted he had last worked in the state department 30 years ago, was intimately involved in Ronald Reagan’s policies in Nicaragua and El Salvador in the 1980s.

In 1991 he pleaded guilty to two counts of misleading Congress over Reagan’s secret plan to bypass the legislature and fund Contra rebels in Nicaragua.

The Mexican president, Andrés Manuel López Obrador, has said his country is prepared to mediate talks between the two sides, and on Friday, Maduro announced he was prepared to hold talks with his challenger “any place, any time”.

But Guaidó rejected that invitation: “Fake dialogue is no good to anyone.”

“The only solution now is an end to usurpation, a transition government and free elections,” he said.

Supporters who had packed the Plaza Bolívar de Chacao to hear Guaidó speak expressed optimism about the future. “I came to see history in the making. I dropped everything I was doing to come see this,” said Morella Atencio, a 48-year-old blogger.

“I am happy, afraid, nervous, expectant. Anything can happen at this point,” Atencio added.

“We’ve managed to pull Maduro out of his comfort zone, we have shaken the status quo and you are no longer faced with a revolution that feels entrenched in power,” Paparoni said.

Human rights groups on Friday said they feared an escalation in deadly repression which has reportedly already seen 26 people killed across the country this week.

“There is every reason to worry that the government’s response to these protests will follow the same pattern we have been documenting in Venezuela since 2014,” warned José Miguel Vivanco, Human Rights Watch’s Americas chief.

But in his speech, Guaidó said political repression had failed in the past and would fail again now. “Here we are and here we will remain, working for the freedom of our country,” he said.

Paraphrasing the Chilean poet Pablo Neruda, Guaidó added: “They can cut a flower but they will never stop the spring from coming.”

Democratic Socialists, National Socialists and the ties that bind.

Michelle Obama Smears Trump Inauguration Crowd, Says It Was Not ‘Reflective’ Of America

Trump Has Made It Official: Detained Migrants WILL Be Going To Sanctuary Cities, Dems To Go BERSERK

Trump’s Economy Just Broke A 24-Year Record, And Democrats Are Going To Be Pissed

Kayleigh McEnany: Dems thought Mueller would be their savior – Instead he killed hopes of impeaching Trump

No pity for corrupt Maduro, who has broken his country. Now, democracy must have its day

United Nations Admits It’s In Deep Bother – Seems to be Like Trump Was Proper, UN Will Shut Its Doorways If Member States Don’t Pay Up