The Venezuelan opposition leader spearheading efforts to unseat Nicolás Maduro has rejected his rival’s claim that his campaign has failed but admitted the “trickle” of military defections to his side had so far been insufficient to force change.

In an interview with the Guardian, Juan Guaidó – now recognised as Venezuela’s legitimate interim president by more than 50 governments – insisted his country’s march into a new political era was unstoppable and Maduro’s “cruel dictatorship” doomed.

He repudiated Maduro’s claim this week that the opposition’s audacious challenge had collapsed as a mix of propaganda and delusion.

“I don’t see how [it is over] … In fact, I’d venture to say change in Venezuela is irreversible … Never before in Venezuela have we had such an important opportunity to achieve democratic change,” said the 35-year-old lawmaker who has been catapulted to fame since declaring himself Venezuela’s rightful leader on 23 January.

“I believe he is utterly detached from reality – constantly contradicting himself in his speeches – and this is a worry when we are seeking a peaceful transition,” Guaidó added of Maduro.

“This is how dictatorships always behave: they deny reality, they deny crises … What we must do is carrying on pushing forwards … carry on piling pressure on a dictatorship which is obviously not going to hand power over [voluntarily].”

The walls of the Caracas headquarters of Guaidó’s centrist party, Voluntad Popular (People’s Will), are decorated with inspirational quotes from pacifists and freedom fighters including Mother Teresa, Martin Luther King Jr and Nelson Mandela.

But critics question the authoritarian inclinations of several of Guaidó’s key allies, particularly in the US and Brazil.

Brazil’s far-right president, Jair Bolsonaro, has attacked Maduro’s “despicable and murderous” regime but is notorious for celebrating a dictatorship-era torturer and sugarcoating the sins of the generals who ruled Brazil from 1964 until 1985.

The US president, Donald Trump, is also known for his admiration of autocrats including Vladimir Putin of Russia, China’s Xi Jinping, and North Korea’s Kim Jong-un, a Maduro ally whom Trump recently showered with praise.

Guaidó sidestepped criticism of his champions in Washington and Brasilia, claiming he hoped to build a broad international alliance including leftists such as Ecuador’s Lenín Moreno and rightwingers including the Chilean president, Sebastián Piñera.

“It’s an unprecedented coalition in support of a just cause,” he said, pointing to recognition from Australia, Germany, Honduras, Israel, Morocco, Paraguay, Poland, Spain and Japan.

“All those who talk about democracy, freedom and the rule of law, of human rights, of the fight against corruption are, I believe, important allies.”

Juan Andrés Mejía, a Voluntad Popular lawmaker and Guaidó ally, said: “Look, we are thankful to all heads of government that have supported our cause. But the fact that they support us doesn’t mean that we approve of everything they do abroad – or in their own countries.”

Nearly a month after Guaidó sparked a potentially historic showdown with Maduro – who inherited Hugo Chávez’s leftist Bolivarian revolution after his 2013 death – huge crowds of demonstrators continue to take to the streets in support.

But with Maduro showing no sign of budging, some fear Guaidó’s movement could lose momentum. In 2017, mass anti-Maduro protests also convinced many Chávez’s heir was finished only for him to emerge strengthened. 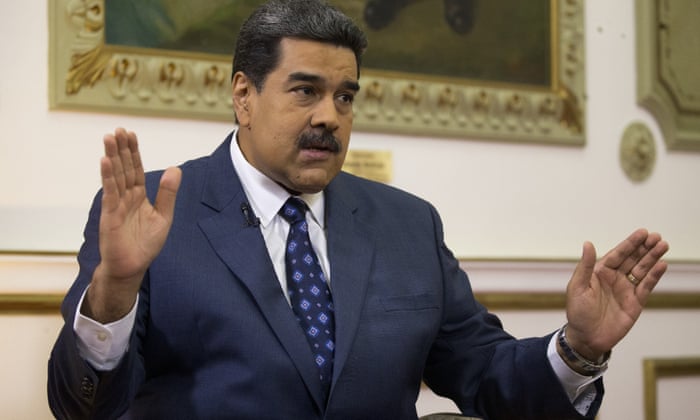 Guaidó insisted the 2019 revolt was different, largely because of its international backing and sky-high discontent among citizens and members of the military suffering the consequences of their country’s economic collapse.

“The fall of the Berlin Wall took a day … It was a barrier and it came down. I believe we are on the verge of something similar,” he said, adding that he hoped Maduro would be gone in “a very short period of time”.

Guaidó claimed 80%-90% of Venezuela’s population opposed Maduro and 80% of Venezuela’s armed forces wanted political change. But he also hinted at opposition frustration that an anticipated wave of high-level defections from the military had not yet materialised.

More than the trickle that we have seen, a declaration en bloc by the armed forces would be ideal,” Guaidó admitted.

With the crisis dragging on longer than many observers had expected, and new American oil sanctions expected to bite soon, some fear food and fuel shortages could contribute to a calamitous breakdown in security.

At an event in Caracas on Wednesday night, one prominent security expert, Javier Ignacio Mayorca, warned: “The security situation in Venezuela could deteriorate tremendously … in the coming days.”

Guaidó admitted there were “X number of scenarios” – including violent ones – for Venezuela’s immediate future, but said he still believed the most likely prospect was a peaceful transition.

“The only ones talking about war are them,” the opposition leader said of Maduro’s authoritarian government, which has been promoting regular displays of military might since the crisis began.

Mayroca said it was also impossible to rule out an attack on Guaidó himself. “Venezuela doesn’t have a tradition of the physical elimination of big political players. But there could always be a first,” he warned, evoking the 1948 assassination of the Colombian politician Jorge Eliécer Gaitán that sparked a decade of bloodshed known as La Violencia.

Guaidó, a spindly father-of-one whose calm manner and eloquence remind some of Barack Obama, admitted he was engaged in a high-stakes gamble. “Doing politics in Venezuela is a risk and you can pay with your life,” he said, pointing to more than 400 political prisoners and 1,000 exiles.

Might jail or exile be his future if Venezuela’s military refused to abandon Maduro?

“Or perhaps even death,” Guaidó replied. “As we say in Venezuela: ‘May God have mercy upon us’,” he added, knocking the table in front of him twice with his knuckles. “Obviously, there is a latent risk.”

With that, Guaidó strode out of the 17th floor office down a corridor whose walls were inscribed with handwritten tributes to his political mentor, Leopoldo López, who was jailed in 2014 for his role in the struggle against Maduro.

One message stood out from the calligraphy. “El futuro nos pertenece,” it said. “The future belongs to us.”

Dems Divide Us by Race While Trump Expands Economic Pie

WOAH: Members Of The View SLAM Warren For Refusing To Hold A Town Hall Event With Fox News

Delusional Pelosi Suggests Trump Should Resign Like Nixon Did

America would run out of avocados in weeks if Trump shuts border with Mexico, grower warns