New court filings show Donald Trump was “at the center of a massive fraud” against the American people, the incoming chair of the House judiciary committee said on Sunday.

Jerrold Nadler, a New York Democrat set to take over the panel in January, said Trump would have committed impeachable offenses if it is proven that he ordered his lawyer to make illegal payments to women to keep quiet about alleged sexual encounters.

“What these indictments and filings show is that the president was at the center of a massive fraud – several massive frauds against the American people,” Nadler said on CNN’s “State of the Union”.

Another top Democrat, the California representative Adam Schiff, said Trump “could face the very real prospect of jail time”.Federal prosecutors said in court filings on Friday that Trump directed his then lawyer, Michael Cohen, to commit two felonies: payments made to women who said they had sex with Trump in return for their silence, in an effort to influence the 2016 election.

They would be impeachable offenses,” Nadler said, though he added it would still be a judgment call for lawmakers whether the offenses were important enough to warrant impeachment proceedings, which should only be launched in the gravest circumstances.

“Whether they are important enough to justify an impeachment is a different question,” he said. “But certainly, they’d be impeachable offenses, because even though they were committed before the president became president, they were committed in the service of fraudulently obtaining the office.”

After Democrats take control of the House, Nadler said, they will aggressively investigate what happened during the campaign.

Perhaps consciously echoing a famous phrase from the Watergate scandal which brought down Richard Nixon, he added: “What did the president know and when did he know it about these crimes?”

Schiff, the incoming chair of the House intelligence committee, said the filings indicate prosecutors may move to indict Trump as soon as he leaves office. The justice department has taken the position that a sitting president cannot be indicted and prosecuted, though the point is disputed among legal scholars and politicians.

“There’s a very real prospect that on the day Donald Trump leaves office, the justice department may indict him – that he may be the first president in quite some time to face the very real prospect of jail time,” Schiff said on CBS’s Face the Nation.

The California Democrat said the “powerful case” prosecutors made for Cohen to serve a prison sentence would apply “equally” to the man identified in filings as “Individual 1”: the president.

“To have the justice department basically say that the president of the United States not only coordinated but directed an illegal campaign scheme that may have had an election-altering impact is pretty breathtaking,” he said. 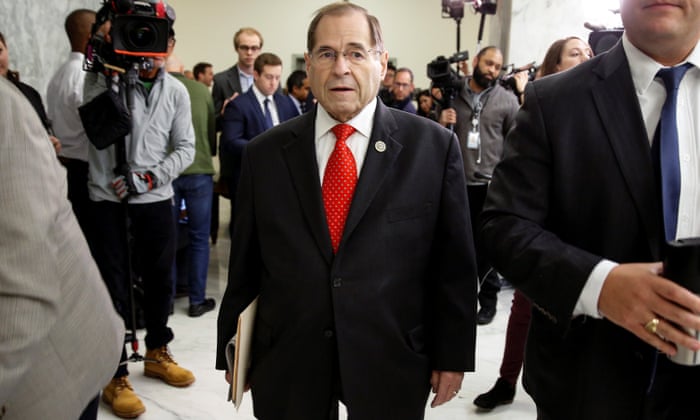 Schiff also said the intelligence committee will call Cohen to testify before Congress again. Cohen has pleaded guilty to lying to Congress in prior testimony. Schiff said the committee has already been in touch with Cohen’s lawyer.

Senator Marco Rubio, a Florida Republican, said Trump’s alleged actions were “things that cannot and should not be ignored”.

“We want to know everything, and we will know everything that has happened here at some point,” Rubio said, also on CNN. “If someone has violated the law, the application of the law should be applied to them like it would be to any other citizen in the country.”

Appearing on CNN, ABC and CBS, Rubio repeatedly said a presidential pardon for Paul Manafort, the former Trump campaign chair whose links with Russia were also detailed in court filings on Friday, would not be a good idea. Trump has publicly declined to take the idea off the table.

“I believe it’d be a terrible mistake,” he told ABC’s This Week. “Pardons should be used judiciously. They’re used for cases with extraordinary circumstances.”

Senator Angus King, an independent from Maine who caucuses with Democrats, sounded a note of caution about the possibility of impeachment, saying there is not yet evidence that would broadly convince Americans they are warranted.

“If impeachment is moved forward on the evidence that we have now, at least a third of the country would think it was just political revenge and a coup against the president,” he told NBC’s Meet the Press. “That wouldn’t serve us well at all. The best way to solve a problem like this, to me, is elections.”

“You’re overturning the will of the voters,” he said. “I’m a conservative when it comes to impeachment. I think it’s a last resort and only when the evidence is clear of a really substantial legal violation … we may get there, but we are not there now.”

WATCH: Melania Goes Full Mama Bear When Asked About Attacks On Barron; ‘It Does Make Me Angry’