Donald Trump has spent the week on a victory lap, which culminated in thousands of his jubilant supporters packing Thursday’s rally in Grand Rapids, Michigan, where there was a general sense of confidence about the president and his chances of re-election in 2020.

Things are swinging his way,” said Laurie Shott, a Trump supporter who sported a Trump-Pence 2020 T-shirt with a stars and stripes scarf and hat outside the arena.

In the days ahead of Donald Trump’s rally, the US attorney general, William Barr, issued a summary of the special counsel Robert Mueller’s report, which said the evidence collected in the course of the two-year investigation showed Trump did not collude with Russia to influence the outcome of the 2016 US election that put him in the White House.

“He was cleared by the Mueller report, which was no surprise, he’s building the wall,” Shott said, standing next her husband who waved a red, white and blue Trump-Pence 2020 flag he purchased from a vendor. “We’re feeling a little better about how things are going.”

Though such Trump events always have the feel of a campaign rally, multiple Democrats in recent months have announced their candidacies for the 2020 race for the White House, and Trump and his supporters also appear to be turning their eyes more purposefully towards the next election.

On Thursday, Trump spoke about how “easy” his 2020 campaign will be, and the crowd several times broke out into chants of “four more years”.

Trump supporters who spoke with the Guardian before the rally all said theywere still behind the president, and expressed varying degrees of confidence that he will be re-elected. They said they absolutely approve of the direction in which he’s steering the country, pointing to accomplishments or progress on three main issues: immigration, the economy and abortion.

“Overwhelmingly, his economic policies have done not only great things for our state, but our country, too,” said Curt VanderWall, who lives about 100 miles north of Grand Rapids in Ludington. “I think Trump has an excellent opportunity to win in 2020, and I fully expect him to be re-elected.” 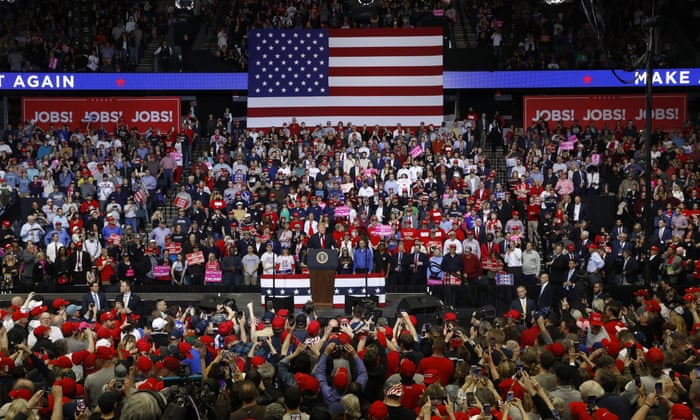 “I’ve got two young sons coming up into the workforce and it’s looking good for them, so I’ll be voting again for [Trump],” she added, though she’s “cautiously optimistic” that a majority of Michiganders will join her.

“I was feeling not so good based on comments from people I know and the media, but, boy, this is changing my mind,” she said while gesturing toward a line of people stretching far down the blocks around the arena. “I’m encouraged that this city is supporting Trump.”

Grand Rapids resident Kim Jensen, who was planning to attend the rally with Bennett, said they were enjoying the atmosphere, but they had to go home because the line was simply too long.

“Our 81-year-old mother is sitting on the stoop up there. We were going to pick her up on our way in line, but there’s no way we can do it,” Jensen said. By the time the speech started, thousands of supporters watched Trump on screens outside the arena.

Though there was enthusiasm for Trump in a deeply conservative part of the state, Michigan could be a tougher contest for him in 2020.

Multiple Democratic presidential candidates have already stopped in the state early in their campaigns, and it’s unlikely a Democratic nominee will make the mistake of only visiting Michigan once ahead of the election, as Hillary Clinton did in the 2016 race.

A recent poll shows a majority of Michiganders don’t plan to vote for Trump. But Shott offered this response to the poll: “They were wrong last time, so I don’t care what they say.”

Jensen and others all said they want Trump to complete the wall, and listed immigration among their top concerns.

Several supporters said they didn’t only blame Democrats for Trump failing to get the wall built yet, or carrying out other parts of his agenda – they also blame Republicans. Leon Jordan, who drove about a half-hour from Zeeland to see Trump, said it was “unfortunate” that if “any part of the political system has held [Trump] back, it’s his own group”.

Air Force sent crews to Trump resort in Scotland up to 40 times since 2015: reports

An independent is challenging Adam Schiff in 2020 Election

California Didn’t Use $1 Billion In Taxpayer Money For State Project, So Trump Just TOOK IT BACK

Mattis: Trump is ‘an unusual president’