‘You mustn’t miss the dock dung,” said our friend Jeremy. “But you’ll have to wait till lunchtime for the avocets,” added his partner Trish.

The last time I had been in these parts was in 2003, when I was making a TV series about the river with Dartmoor photographer Chris Chapman, and he was my companion again today. The sky was clear as we set off from the station, initially heading north-west towards Calstock to join a public footpath through woodland down to the river that forms the border with Cornwall, the Tamar.

The morning sun was warm on our backs as we crossed a meadow and a stream then rejoined the woodland. Ramsons, or wild garlic, wood anemone and primrose were in abundance alongside daffodils and violets. The plethora of colour was a clue to the history of these slopes. At one time these now-wooded valleys were carpeted with soft fruits and commercial daffodils, and dotted with orchards. From the mid-19th century, trees had been cleared by enterprising people to make room for market gardens that sent early fruits and flowers to Britain’s towns and cities, an industry for which the peninsula became famous.

Those words had rung in our ears as we stepped off the Tamar Valley train at Bere Alston station, ready to walk a 6½-mile route to Bere Ferrers, where we would stop for a picnic outside the Olde Plough Inn. We were in the Bere peninsula, a part of south-west Devon that is bypassed by many but which in spring, with flowers in abundance, amazing river views and enticing bird life, is a walker’s paradise 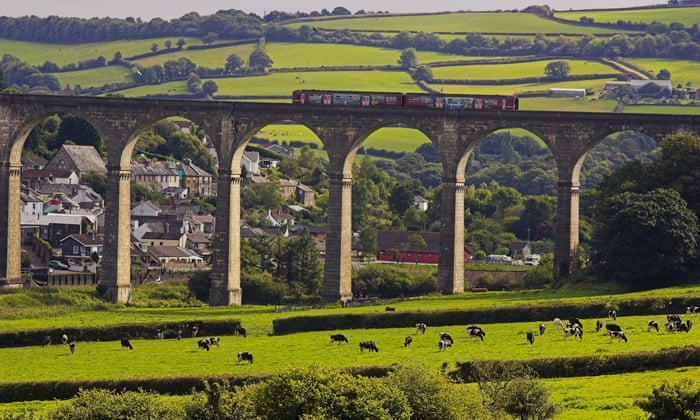 Two forces had helped them. The steep sides of the Tamar Valley were perfect for growing soft fruit and flowers, and thanks to the tidal nature of the river, the area was almost immune to frosts. River barges brought manure and other detritus from the dockyards of Plymouth and Devonport – the “dock dung” that Jeremy had mentioned. This, spread on the slopes, proved highly nutritious for the bulbs and fruits, but the public health authorities were not so impressed. By 1920 dock dung had been banned, though as Jeremy said, you can still find all sorts of bits and pieces – glass, ceramic, shells, even marbles, relics of the dock dung days – scattered in the ground. As we walked, we picked up a fragment of blue-patterned porcelain and a chunk of old glass.

If the valley provided the perfect environment for the market gardens, railways provided the means for the perishable stuff to get to market. In 1890, the London and South Western Railway opened a line from Waterloo to Plymouth that went via Bere Alston. Growers could get their perishable but sought-after products into London overnight and for generations they prospered.

Then, on 6 May 1968, another historic railway decision, the wielding of Dr Beeching’s axe, closed the line and pretty much killed the industry (leaving Bere Alston to be served by the Tamar Valley branch line only). Today there are only a handful of growers left. Many of the former gardens have reverted to nature, leaving a huge variety of daffodils to compete with the woodland for spring light. Luckily for us, the blooms succeed rather well.