With the US under the first day of a partial government shutdown the Senate majority leader said would extend past Christmas, Donald Trump and Democrats sought to apportion the blame.

Hundreds of thousands of federal workers were either forced to take unpaid time off or forced to work without pay. The president said they should “call it a Democrat shutdown”.

But Democratic leaders blamed Trump for a “temper tantrum” – and pointed out that only last week, the president said he would welcome a shutdown over border security and would in fact be proud to force one.

The Senate adjourned without a solution, guaranteeing that the shutdown will continue until at least Thursday.

The shutdown occurred after Trump demanded budget legislation including more than $5bn in funding for a wall on the border with Mexico – a key campaign promise – and Democrats refused to give it. On Saturday, the battle lines did not budge an inch.

Speaking on the Senate floor, majority leader Mitch McConnell said the onus for coming up with a solution was on the Democrats and Trump.

The minority leader, Chuck Schumer, addressed the president directly, saying: “If you want to open the government, you must abandon the wall.”

In a call with reporters, a White House official speaking on condition of anonymity said: “We continue to articulate what our expectations are for Congress, which is $5bn for border security and physical barriers.” 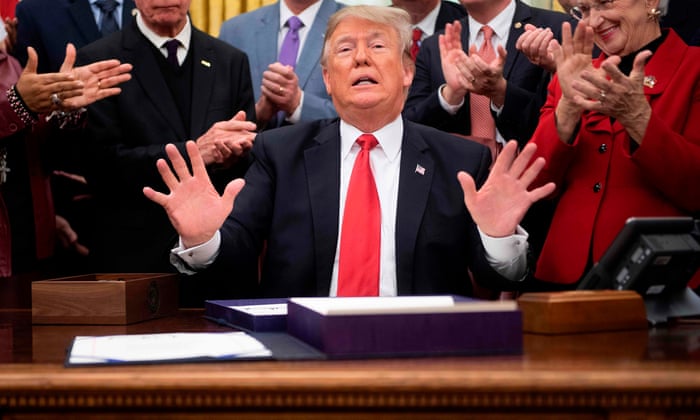 The White House official said the administration hoped the shutdown would only last for a few days, but it could last longer. White House press secretary Sarah Sanders later said Trump would remain in Washington over Christmas, cancelling a planned vacation. His wife Melania, who flew to Florida on Friday, was due to return to the capital.

Earlier in the week, Trump had seemed set to avoid a shutdown by signing a short-term spending bill without his requested wall funding. Then he reversed under pressure from rightwing media and backed a bill passed by House Republicans that stood no chance of gaining the necessary votes in the Senate.

The shutdown is the third in a year, the result of partisan dysfunction notable even by Washington standards, and the national mood has duly been affected. After a week which included the resignation of the defense secretary, James Mattis, stock markets closed well down on Friday after their worst week in a decade. On Saturday Trump lost another senior official, the anti-Isis envoy Brett McGurk.

The shutdown began at midnight. Trump remained at the White House, with his daughter Ivanka Trump and son-in-law Jared Kushner, both key advisers. In a video posted to social media, the president said: “Now it’s up to the Senate, and it’s really up to the Democrats, because we need their votes. We’re going to have a shutdown. There’s nothing we can do about that. Call it a Democrat shutdown, call it whatever you want.”

Schumer and House minority leader Nancy Pelosi responded, saying: “Instead of honouring his responsibility to the American people, President Trump threw a temper tantrum and convinced House Republicans to push our nation into a destructive Trump shutdown in the middle of the holiday season.

“President Trump has said more than 25 times that he wanted a shutdown and now he has gotten what he wanted.”

Schumer and Pelosi also said that if the shutdown persisted, Democrats would pass legislation to reopen the government when they take over the House in January. 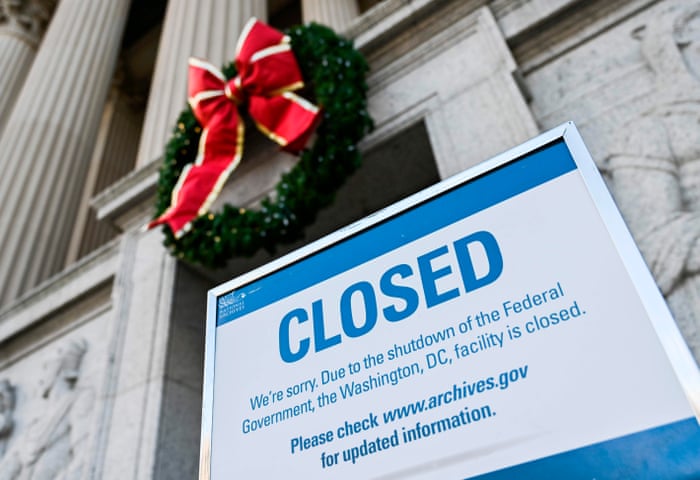 he billionaire Tom Steyer, who has campaigned for Trump’s impeachment and is reported to be considering a run for the presidency, said in a statement the shutdown was “just another example of why Trump is unfit for office”. He added: “We need a president who fights for the American people and improves our country, not one who threatens the jobs and well-being of federal employees to promote his racist agenda.”

The shutdown was reported to be among issues – including market instability, Trump’s announcement of withdrawal from Syria and the Mattis resignation – placing pressure on the president’s relations with Republicans in the Senate, a bloc key to fighting off any impeachment effort.

The president began Saturday quietly. In his first tweet, shortly after 11am, he aimed to defend his behaviour.

I am in the White House, working hard,” he wrote. “News reports concerning the Shutdown and Syria are mostly FAKE. We are negotiating with the Democrats on desperately needed Border Security (Gangs, Drugs, Human Trafficking & more) but it could be a long stay.”

A “large group concerning border security” met for lunch. The guests were all presidential aides and conservative congressional Republicans, not party leaders.

Those being furloughed include nearly all staff at Nasa and 52,000 workers at the Internal Revenue Service. About eight in 10 employees of the National Park Service will stay home. The Senate passed legislation ensuring workers will receive back pay, which the House seems sure to approve.

Some agencies, including the defense, veterans’ affairs and health and human services departments, were already funded. The US Postal Service will not be affected because it is an independent agency. The FBI, border patrol and coast guard are also still functioning. Transportation Security Administration officers will continue to staff airport checkpoints and air traffic controllers will also remain at work.

most viewed in US

Trump Just Ruined Cohen’s Day, Has Evidence He PERJURED Himself To Congress

NOT A JOKE: Liberals Launch Dinner Events Where White Women Are Shamed For Their “Systemic Racism”

MAGA: Where Trump Just Donated His Latest Presidential Check Will Make You PROUD