It’s difficult to imagine the voracious and predatory great white shark as prey. Could orcas really be overpowering them and removing their livers?

As a result, it is difficult to imagine a great white as prey. And yet, earlier this year the carcasses of five great whites washed ashore along South Africa’s Western Cape province. Ranging in size from 2.7 metres (9ft) to 4.9 metres (16ft), the two females and three males all had one thing in common: holes puncturing the muscle wall between the pectoral fins. Strangest of all, their livers were missing.

The bite marks inflicted, together with confirmed sightings indicate that orcas, Orcinus orca, were responsible for this precisely-targeted predation. Although the opening scene from Jaws II immediately springs to mind, in which an orca washes up with huge bite marks on it, the reality has turned out to be the exact opposite.

When comparing these two apex predators alongside each other, the stats read like a game of Top Trumps. Max length: great white 6.4 metres, orca 9.6 metres; max weight: great white 2,268kg, orca 9,000kg; burst swim speed: great white 45km/h, orca 48km/h. On paper, at least, it does seem that orcas have the edge.

The diet of orcas is often geographic or population specific. Those populations predating in South African waters have been documented targeting smaller shark species for their livers. Cow sharks, blues and makos caught on longlines have had their livers removed by orcas, alongside the brains of the billfish also caught. Cow shark carcasses without livers have also washed ashore near Cape Town, and again, this followed nearby orca sightings.

With no doubt that orcas are using highly specialised hunting strategies to target the liver; the real question is: why?

Shark livers are large, typically accounting for 5% or more of a shark’s total body weight. They are oil rich, with a principal component, squalene, serving as an energy store and providing buoyancy in the absence of the swim-bladder found in teleosts (bony fish).During a 1997 encounter off the Farrallon Islands off the coast of San Francisco, a group of whale watchers witnessed an orca ramming into the side of a great white shark, momentarily stunning it and allowing the orca to flip it over and holding it in place (ventral/belly up) for around 15 minutes, after which the orca began consuming its prey, much to the surprise of the whale watchers on board. A similar incident was captured on film off Costa Rica in 2014 – this time the orca’s prey was a tiger shark. And it’s not just sharks; orcas have been observed doing the same to stingrays too.

What the orcas were exploiting to their own advantage is a curious phenomenon known as “tonic immobility” (TI). This is a natural state of paralysis, which occurs when elasmobranchs are positioned ventral side up in the water column. For certain species of shark like the great white, which is unable to pump water across its gills unless it keeps swimming, the consequence of being maintained within this ‘tonic’ state for too long is final. Effectively, the orcas have learned how to drown their prey whilst minimising their own predatory exertion.

T I is a reflex that is characterised by a catatonic state and total loss of muscle tone – it equates to at least stage IIb of anaesthesia (loss of consciousness to automatic respiration, as shown by McFarland, 1959). It has been observed and documented for a variety of terrestrial species, but in the aquatic environment it is usually associated with elasmobranchs. 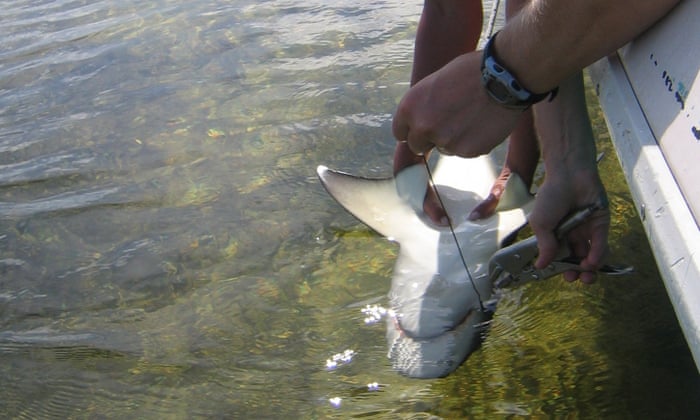 Researchers often use this reflex to help with the surgical implantation of acoustic tags. The rapid induction and recovery of the animals optimises the surgical procedure, which is particularly desirable during what are often complex field work conditions (Kessel & Hussey 2015

Helpful to researchers and predatory orcas it may be, but the evolutionary benefit to those elasmobranchs exhibiting TI is less certain. It may serve as a defence strategy, but the advantage of sharks being able to “play dead” is not clear. An alternative theory suggests that TI may be related to mating, with males using it as a technique to temporarily immobilise the female.

Whatever the primary use of TI is in the wild for elasmobranchs, orcas are known to exploit this to aid their predation. The sharks however, also learn, and sightings of great whites off the South African coastline rapidly declined whilst the orcas were in the area. Once the orcas moved on, the great whites slowly began to return

The Rock BODY SLAMS ‘Generation Snowflake,’ People Who Are ‘Always Looking To Be Offended’

Ben Carson SILENCES Rep. Omar After She Mocks Him For Looking ‘Sleepy’

WOW: After Getting Hit With THREE Ethics Complaints, AOC Was Removed From Top Board

Trump FIRES BACK At Ann Coulter Over Her Recent Attacks

Omar Accused of Antisemitism Again After Tweet, Martina Navratilova Calls Her Out

Trump Strikes Back; Calls For Investigation Of Top Democrat

BOMBSHELL TESTIMONY: The Clinton Foundation Acted As Agents Of Foreign Governments “Early In Its Life And Throughout Its Existence”

Trump revisits Pledge of Allegiance controversy: People are ‘sick and tired’ of ‘stupidity and disloyalty’