Nasa scientists are celebrating after a spacecraft “phoned home” to confirm it had successfully performed the most distant space flyby in history in the early hours of New Year’s Day.

Thousands of photographs of the dark, icy space rock called Ultima Thule were snapped by the New Horizons probe as it barrelled past it on the outer edge of the solar system at 0533 GMT.

After being out of contact for 10 hours, anxious staff at the mission’s control centre at Johns Hopkins University in Maryland broke out in applause on Tuesday after confirmation signals were received from the probe, which could have been seriously damaged by even the smallest particles.

“We have a healthy spacecraft. We’ve just accomplished the most distant flyby,” said Alice Bowman, mission operations manager for New Horizons. “We are ready for Ultima Thule’s science transmission, science to help us understand the origins of our solar system.” 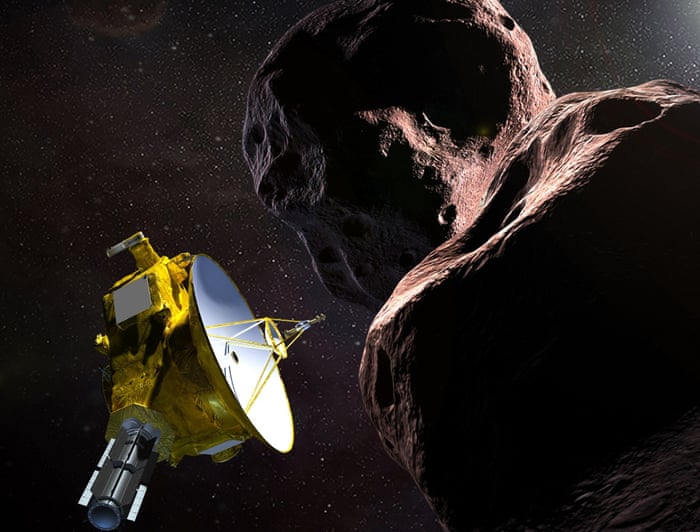 Ultima Thule lies 4bn miles (6.5bn km) from Earth in the Kuiper belt, a band of dwarf planets, space rocks and icy debris left over from the formation of the solar system 4.6bn years ago. Because of the distance, scientists had to wait 10 hours to learn whether the flyby had been successful.

From being a small dot only known in the form of a number of pixels, Ultima Thule will soon be viewed as an “entirely new world”, according to Nasa, as further images are beamed back. The first pictures are expected to be published later this week, but the full download of the data will take 20 months to complete.

Alan Stern, principal investigator of the New Horizons mission, said images taken during the spacecraft’s approach suggested Ultima Thule is probably shaped like a bowling pin, with two bulbous ends. However, he said a possibility remained that it may be two separate objects locked in a tight orbit.

New Horizons is so distant that mission scientists had no way of helping out with any last-minute glitches. Instead any final troubleshooting will have to have been handled by the probe’s onboard software.

Jim Bridenstine, Nasa’s chief administrator, said in a tweeted statement: “In addition to being the first to explore Pluto, today New Horizons flew by the most distant object ever visited by a spacecraft and became the first to directly explore an object that holds remnants from the birth of our solar system.

“This is what leadership in space exploration is all about.”

Hal Weaver, a research professor at Johns Hopkins University and a project scientist on the New Horizons mission, called the flyby a “once-in-a-lifetime opportunity”.

“This is another great step in the exploration of our solar system,” he said.

n 2015, New Horizons flew past Pluto and captured a stunning series of photographs of the dwarf planet’s surface. The images revealed Pluto to be a world where nitrogen mountains tower above the ground and volcano eruptions discharge ice into a thin hydrocarbon atmosphere.

After the Pluto encounter, Stern asked Brian May, the Queen guitarist and astrophysicist, if he would compose a track to celebrate the Ultima Thule flyby.

“I did scratch my head for a while,” said May. “The name is quite hard to conjure with. But then it came to me that this is about man’s desire to reach out into the universe and explore, and see things that have never been seen before.”

The New Horizons track, May’s first solo single for two decades, included a message from Stephen Hawking and was premiered at the control centre shortly before the flyby. “It’s been very exciting. I feel like I’m on that thing,” May said. “To me, it’s about the human spirit and reaching out to discover where we are and why we are here.”

Little is known about Ultima Thule, or 2014 MU69, to use its official name. But based on preliminary observations, scientists think it may resemble a giant peanut with two large lobes fused together. The dark rock may contain frozen carbon monoxide, carbon dioxide, molecular nitrogen and methane, which may be exposed by impact craters on the surface.

We’ve never explored a body as primordial or as far away from the sun as Ultima Thule,” said Mohamed Ramy El Maarry, a New Horizons science team collaborator and lecturer at Birkbeck, University of London. “This gives us a chance to look at what comets are like before they enter the inner solar system. They’ve been in deep freeze since they formed 4.6bn years ago.”

The first images to be beamed home from Ultima Thule will be small and grainy, but a day or two after the encounter, Nasa hopes to have more impressive pictures from the probe. “This is the first time we’ll fly past a cold classical Kuiper belt object and really see what it looks like,” said Weaver. “We’re taking our first steps into this whole new zone of the solar system. We’re on our way.”

Bowman said: “We can build a spacecraft on Earth, and we send it out billions of miles away from Earth, and it sends us back all this wonderful data that we get to look at and learn more about our world, our solar system.

“There’s a bit of all of us on that spacecraft that will just continue after we’re long gone here on Earth.”

James O’Keefe Posts Cryptic Tweet, And Bernie Should Be Shaking In His Boots

Opioid deaths in Iowa are down 33 percent. Tighter regulations have helped.

State of the Union: Stacey Abrams to deliver Democrats’ response – as it happened

WOW: Ocasio-Cortez’s Constituents Are FED UP; ‘You Worked In A Bar, You’re Not A Princess’

Bernie And AOC Talk Of Turning Post Office Into A Bank, But They Just LOST $2 Billion In Three Months