he concept of “Iowa Nice” has long been central to campaigning in the first-in-the-nation caucus state. But it’s rarely been a concept around which a first-tier candidate for president has structured a whole campaign.

However, since entering the 2020 race on New Year’s Eve, the Massachusetts senator Elizabeth Warren has tried to build a campaign staff focused as much on a healthy workplace culture as cutthroat political nous.

The Democrat has the luxury of being considered one of the frontrunners for her party’s nomination and she has been able to make a number of marquee hires. But as she has done so, she has emphasized the need to hire the rightpeople, not the best people, all the while mining wisdom from The Cubs Way, a book about how team president Theo Epstein used workplace culture as a tool to end the Chicago Cubs’ 108-year wait for a World Series win.

Iowa operatives marvel that at a time when many candidates are struggling to hire any top staffers at all, Warren has made a number of impressive additions.

Earlier in January, she announced four hires of operatives with ties to the state. Among them were Emily Parcell, a veteran of Barack Obama’s victory over Hillary Clinton in 2008, and Brendan Summers, who played a critical role in Bernie Sanders’ near-tie with Clinton in 2016. Pete D’Alessandro, who ran the state for Sanders, told the Guardian Summers provides a “systemic advantage” for any campaign that hires him.

The hires accompanied Warren on her first trip to the Hawkeye state. Jeff Link, a top Iowa Democratic operative unaffiliated with any candidate, thought she had “an impressive rollout” in a trip that was “probably as good as anyone could have expected”.

Within the Warren campaign, the trip more than met expectations. The Massachusetts Democrat drew big crowds on a swing that mostly covered western Iowa, traditionally the most conservative part of the state. The challenge was ensuring that Warren would have at least a minute with everyone who wanted to take a selfie and could at least try for one-on-one interaction with potential caucus-goers who sought it.

Link, though, said Warren’s campaign “is going to have to catch [up] to the level of support they have, no matter what”.

“I’m guessing that there are more people that support Elizabeth Warren than anyone in the Warren [campaign] has on a list,” he explained. “One of the goal of caucuses is to have name and addresses of all your supporters.”

While no campaign can “identify all their supporters today”, he added, “that’s the point of having a year and having a big operation: to get yourself organized.”

One Democrat operative working with a rival campaign saw Warren as the clear early frontrunner. The operative, who declined to be identified so he could speak frankly, thought the senator “should have support throughout the state, particularly in communities that have been economically depressed over the years”. He also noted that she was the candidate most comparable to Tom Harkin, the state’s long-time populist Democratic senator, in the field so far. 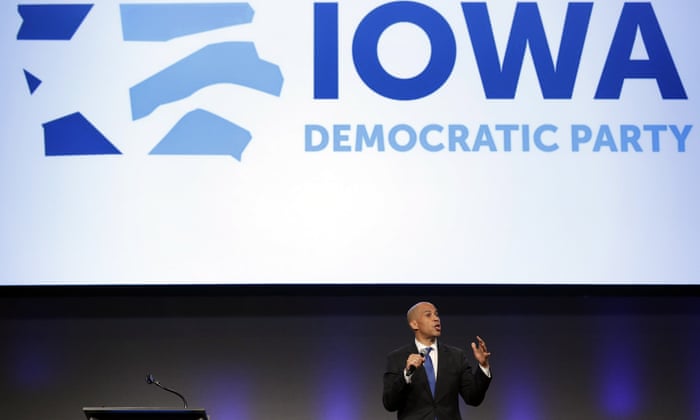 In 1992, during an ultimately unsuccessful presidential bid, Harkin was anointed the winner of the caucuses without competition. But Warren will face a stiff test. Operatives agree that her closest rival among first-tier candidates, in terms of having the most robust political machinery in the state, is New Jersey senator Cory Booker, as yet not formally declared but likely a formidable contender. Among the dark horses, former congressman John Delaney, a moderate, has two-dozen staffers on the ground.

Warren will also face real competition for the support of the most progressive caucus-goers. Sherrod Brown, the Ohio senator, has not declared a run but will nonetheless make a swing through the state next week, trying to appeal to many of the voters Warren is courting. Furthermore, although Warren has been devoting regular call time to top Iowa Democrats for months and has now held a breakfast in a Des Moines hotel with top activists and party leaders, she is still nearly half a decade behind Sanders in building an Iowa presence.

In a crowded field which will include at least two other female senators, Kirsten Gillibrand of New York and Kamala Harris of California, and a potpourri of governors and congressmen, it will be difficult for any Democrat to win.

The Cubs, however, faced far longer odds than Warren does in Iowa.

FBI Agents Manipulated Flynn 302 Interview. His Case Must Be Dismissed. It Was A Setup

State of the Union: Stacey Abrams to deliver Democrats’ response – as it happened

IT’S ON: Trump Hits Mexico With Tariffs In Response To Migrant Crisis

Trump says he agrees ‘100%’ with keeping U.S. troops in Syria