IF DONALD TRUMP’S CHINA TRADE WAR ESCALATES, THE U.S. COULD LOSE ALMOST 800,000 JOBS AND PLUNGE INTO A DEEP RECESSION: ECONOMISTS

Economists at Moody’s Analytics estimate in a report that further escalation of President Donald Trump’s trade war with China could cost the American economy hundreds of thousands of jobs and plunge it into a deep recession.

Moody’s says there is a 35 percent probability that the trade war will escalate. It modeled the potential impacts of an escalating trade conflict between the U.S. and China, which has seen tariffs imposed on much of the $540 billion in Chinese goods imports.

«Given the high-stakes game of chicken, it is not difficult to imagine a darker scenario in which tariffs on all U.S.-China trade rise further and additional nontariff barriers are imposed,» the Moody’s report says

«In this scenario, we assume that tariffs on all U.S.-China trade rise to 30 percent and that a series of nontariff barriers take effect.

«These include Chinese bans on U.S. technology exports, voluntary boycotts of U.S. brands, revoked market licenses for U.S. firms, a sharp devaluation of the yuan, and a threat to sell China’s vast holdings of U.S. Treasuries.» 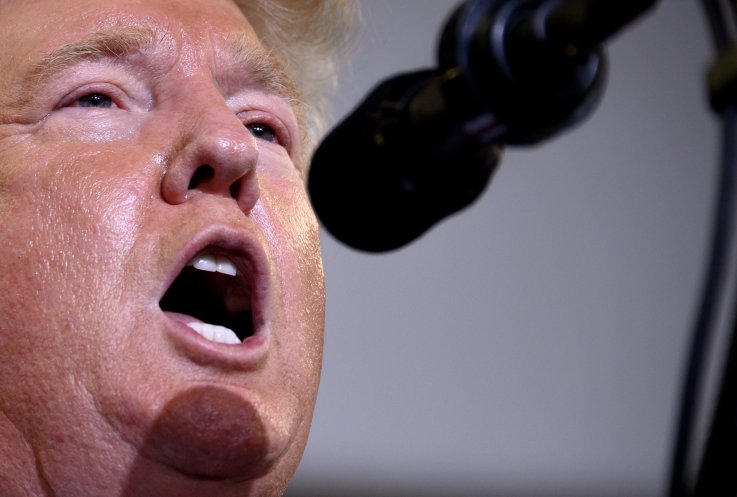 The scenario also assumes U.S. retaliation, the failure of Congress to ratify the new trade deal with Mexico and Canada, a 25 percent tariff on all vehicle imports, and a substantial knock-on effect of the escalation on the global economy, damaging demand and sentiment.

«The result is a large pullback in investment that, along with price increases and ruffled consumers, causes U.S. and global GDP to contract sharply,» according to the Moody’s model for trade war escalation.

«Although the Fed quickly lowers the federal funds rate to the zero lower bound and both major and developing economies adopt monetary stimulus, the blow to global demand overwhelms efforts to ease financial conditions.

«The U.S. dollar appreciates as capital flight intensifies and emerging market currencies depreciate sharply. However, external accounts worsen because of the sharp contraction in global trade. All told, real global GDP contracts by 0.3 percent from peak to trough, with deep recessions in the U.S., Europe, and most emerging markets. Growth in China slows substantially and falls just short of recession.»

Were this to play out, Moody’s forecasts that nonfarm employment would be 793,900 lower by the end of 2021 than the baseline assumption of a trade war standoff between Washington and Beijing, which it has at a 50 percent probability and more likely than escalation or de-escalation.

The graph below, provided by Statista, shows that proposed and existing U.S. tariffs are set to become much higher than those of other advanced economies. 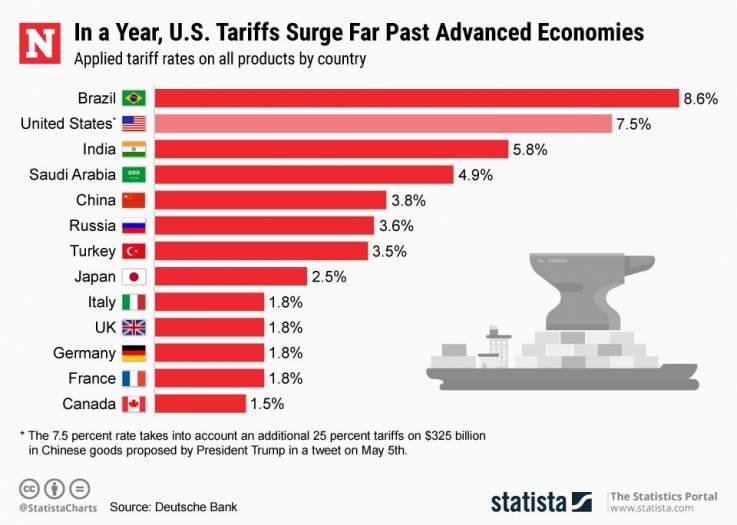 he baseline scenario assumes that the current set of tariffs is here to stay until Trump’s term ends, weakening the domestic and global economies in the meantime. Moody’s said that since the trade war began, it has cost the U.S. around 0.3 percent in GDP and 300,000 jobs.

Talks between China and the U.S. are ongoing and President Trump insists that a trade deal will be reached. The evidence so far suggests the full burden of the tariffs is falling on American consumers, despite Trump’s claims that China is bearing the brunt.

After scrapping NAFTA, claiming it to be unfair to the U.S., Trump’s administration also negotiated a new deal with Canada and Mexico known as USMCA, which is awaiting ratification by Congress.

BOOM: Trump Threatens To Sick The FCC On ‘Saturday Night Live’; Here’s What We Know…

Poll: ICE Is More Popular Than Any Member Of Freshman Democrat ‘Squad

WON’T GIVE UP: Dems Announce ‘Alternative’ To Impeachment, Will Use ‘Plan B’ To Go After Trump

BREAKING: CNN To Be Sued For More Than $250 Million Over ‘Vicious’ Attacks On Covington Teen

Trump Drops Bomb, Says “It Will All Begin Coming Out Quickly”