Does Joe Biden Want to Be Doing This?

How badly do you want to be president?” Joseph R. Biden Jr. was asked after a recent speech in Prole, Iowa. The answer to such an inquiry would appear self-evident in the case of Mr. Biden, who began his running-for-president routine more than three decades ago; in other words, very badly, one would assume.

But the question, posed by a reporter, seemed to come at Mr. Biden as a bit of a curveball — a variant of the “Why do you want to be president?” riddle that CBS’s Roger Mudd famously stumped Ted Kennedy with 40 years ago. The former vice president paused.

“I think it’s really, really, really important that Donald Trump not be re-elected,” Mr. Biden said, more of a rationale than answer. He then launched into a classic Biden roller derby of verbiage in which he listed all the reasons he found Mr. Trump so distasteful. He landed on a question to himself.Could I die happily not having heard ‘Hail to the Chief’ play for me?” the Democratic front-runner asked. “Yeah, I could,” he said. “That’s not why I’m running.”

o why is he running? And is the singular nature of the opponent all it will take to convince voters that Joe Biden really wants to be doing this right now — at this vicious moment in our politics and at this stage of his life?

Remarkably, after all this time, Mr. Biden stumbles to come up with a clear answer.

His use of Mr. Trump as a campaign mission statement might be a good enough reason, at least to win Mr. Biden the Democratic nomination in a large field where two other leading candidates — Elizabeth Warren and Bernie Sanders — appear to be splitting the progressive vote which would be less inclined to support him to begin with.

Mr. Biden’s campaign has been jackhammering home the premise that he is best suited to winning a general election against an incumbent who must not be re-elected.

“He doesn’t think you need a revolution here,” said Anita Dunn, a Democratic media strategist working for the Biden campaign. His enterprise is built more on a strategic bet: that given the possibility of another four years of Mr. Trump, Democrats will gravitate to the familiar and reach for this stitched-up old teddy bear of a candidate.

There is a situation where the electability argument within the context of this primary becomes self-perpetuating,” said Dan Pfeiffer, a Democratic strategist who served as a top campaign and White House aide to Barack Obama. “Everyone thinks Biden’s the most electable, therefore voters tell pollsters that he is more electable — and therefore more people think that, and it sort of all goes around the circle.”

Clearly, other candidates have far more identifiable “whys” attached to their enterprises. Supporters of Ms. Warren would readily point to her fight against a corrupt political system rigged in favor of moneyed interests. Supporters of Mr. Sanders have been hearing his protest against the scourge of economic inequality in America for decades. Supporters of Pete Buttigieg, the 37-year old mayor of South Bend, Ind., would extol him — as he does himself — as a force for the generational change that Washington begs for.

Those are the rallying cries with which Mr. Biden’s “play it safe” selling point is competing. And as strong as that point might be, his superpower of perceived electability coexists with a lingering question about why, exactly, he has decided to jump back into this delirium pen.

Asked another way: Would he be doing this if a more conventional Republican (a Mitt Romney or Jeb Bush) were in the White House?

“Um, I’m not sure, to be quite honest with you,” Mr. Biden said. “I hadn’t planned on running again.” 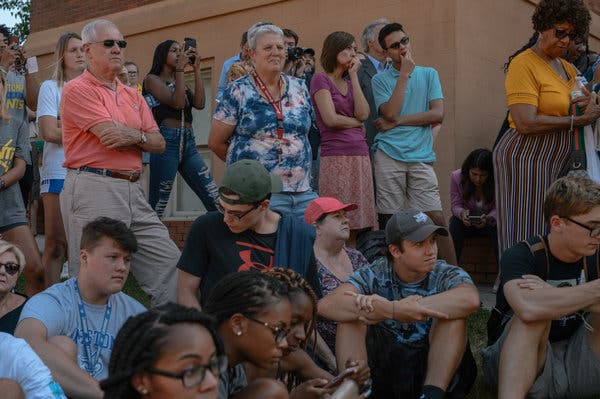 The former vice president can appear, on some days, like a man longing for the hard-earned retirement he had been enjoying after eight years as Barack Obama’s vice president. He could have easily strolled off into a warm twilight, possessed of abundant good-will, newfound wealth, time to enjoy his family and space to grieve the death of his son, Beau, to cancer in 2015.

Yet here was Mr. Biden again, at 76, trudging through another dog day of August in the extreme heat. He had just finished up a small rally in central Iowa, held in a gazebo-like party space overlooking a pond. He seemed a bit riled up, and not in a good way.

“Where are we going?” the candidate glared down at a young staffer in front of his podium a few minutes after finishing his remarks. “Where are we going,” he said again, more pointedly. He became annoyed at a Fox News reporter who asked him about the relative smallness of his crowds compared to those some of the other candidates were attracting — in this case, Ms. Warren, who had drawn a reported 12,000 at a rally in St. Paul, Minn., the night before. “I don’t know what you’re talking about,” Mr. Biden said.

Affection for Mr. Biden runs deep, especially among older voters and with traditional Democratic constituencies such as organized labor and African-Americans. “I’d be comfortable having him come over and have potato soup with us,” said Virginia Petersten, of Johnston, Iowa, who had just watched Mr. Biden speak for over an hour in Urbandale, Iowa.

Beyond this potato soup primary, Mr. Biden’s crowds have been undeniably smaller and less raucous than other top-tier candidates, namely Ms. Warren and Mr. Sanders.

In a tour of about a dozen of these campaign events across the early-voting states during the second half of August, Mr. Biden’s audiences were moderately enthusiastic, always polite and certainly appreciative of his visits. Given their revulsion for the incumbent, many attendees expressed gratitude that Mr. Biden was running for president. But they struggled to identify why he was running, or what the former vice president represented beyond a known and decent entity who was not Donald Trump or Bernie Sanders.

“If I were in his shoes, I don’t know if I felt I had a whole lot more to achieve in life,” Ryan Comstock, of Urbandale, said of Mr. Biden’s motivation after a campaign event. Mr. Comstock, who voted for Mr. Trump in 2016, said he would likely participate in the Democratic caucuses next year. On Mr. Biden, he added, “part of me wants to think that he cares that much about America.”

On the stump, Mr. Biden says he is running to achieve three main things, none of them distinguishable from what he might have said when he ran in 1988 and 2008: 1) to lead the “battle for the soul of America,” 2) to restore the middle class and 3) to unite the country. He also says that he was inspired to run for president in 2017 after seeing how Mr. Trump responded to violent clashes involving white nationalists in Charlottesville, Va.

When you ask people close to Mr. Biden why he’s running, they tend to dispense with any attempt at a higher purpose beyond dislodging President Trump. “It’s that old Vince Lombardi line: Winning isn’t everything, it’s the only thing,” said former Senator Christopher Dodd, Democrat of Connecticut. “And that is the prevailing view of an awful lot of people within the Democratic Party.”

Friends of Mr. Biden suggest that he decided to run for president in large part because he could not have lived with himself if he did not. “Joe has this thing called the ‘Look in the Mirror’ test,” said Ted Kaufman, Mr. Biden’s longtime chief of staff who served out Mr. Biden’s term in the Senate after he became vice president in 2009. “Clearly he has the best chance of beating Trump. And if he did not run this time and Trump won, then what would he think of himself when he looked in the mirror?”

Mr. Biden knows that winning would just be the start. “The longer I’ve been around, the less that appeals to me,” Mr. Biden said in Prole of being president. “I’ve watched up close and personal what eight years in the White House is like.”

It is not hard to whiff a heavy scent of obligation around Team Biden, as if they were positioning him as a kind of Democratic savior. “We didn’t really intend to be going on this journey,” Jill Biden said at a fund-raiser in Sun Valley, Idaho, this summer. “But when it came down to it, too many people were saying, ‘Joe has to run,’ ‘Joe has to run.’”

In other words, Mr. Biden now feels a responsibility — or “special calling,” in the words of Senator Chris Coons, Democrat of Delaware.

So here is Mr. Biden, answering his “special calling.” He has always been a gifted retail campaigner with a knack for snapping into empathy mode whenever people share their stories of grief and hardship.

After Scaramucci Turns And Bad Mouths Trump, POTUS Unloads Like He Got Paid To Do It

Britain’s direct complicity in the war in Yemen must end

Trump Shreds Iraq After They Vote to Remove US Troops

NO WAY: Pelosi Triples Down With Another SAD EXCUSE For Omar’s Hateful Words [VIDEO]