Lady Gaga is not the first actor to wear Valentino on the red carpet, but she is probably the first to dye her hair blue to match her gown.

The award-season buzz that began around A Star Is Born last autumn pleased fans of fashion almost as much as it did movie fans, because of the intriguing prospect of seeing the world’s most fearless dresser on the biggest red carpets of them all. And Gaga’s first big moment as a nominated actor did not disappoint – at least on the fashion front

By the standards of Gaga, who wore a dress made of raw steak to the MTV awards and red latex to meet the Queen, the periwinkle-blue Valentino ballgown she chose for the Globes was a relatively tame choice. Nonetheless, with a train longer than its height, the grandest of puff sleeves and a coordinated pastel up-do, it was a dress to steal any show.

The neckline and colour were strikingly similar to a dress worn by Judy Garland in the 1954 original of A Star Is Born. The messaging of Gaga’s look – a homage to Hollywood history, complete with 100 carats of Tiffany diamonds – suggested that Gaga is serious about reinventing herself as a Hollywood star. 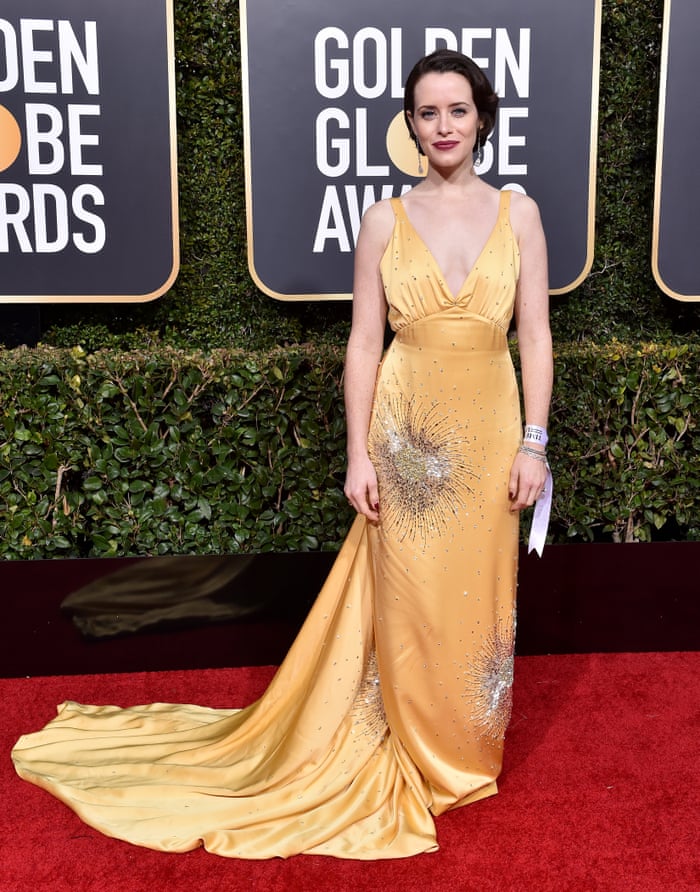 After last year’s Time’s Up-inspired red-carpet blackout, colour returned to the red carpet. There was a comeback for sunshine-yellow dresses, which were a phenomenon two years ago following the success of La La Land. Claire Foy, nominated for her role in First Man, wore a Miu Miu dress with starburst embroidery in a shade close to the custard Prada gown worn by The Marvellous Mrs Maisel’s Rachel Brosnahan.

Political statements were largely limited to Time’s Up x2 bracelets, as worn by nominee Amy Adams and British actor Jameela Jamil, who revealed on Twitter that she was wearing jeans under her pink Monique Lhuillier ballgown to keep warm.

Oh, the first actor of Asian heritage to present the awards, followed her white gown with a red, tuxedo-collared dress, also by Versace, then changed into white-and-gold Stella McCartney.

“I called the women’s gang. I called Stella McCartney. I called Donatella Versace,” Elizabeth Saltzman, Oh’s stylist, told People. “She’s wearing all-female designers, but that’s not a statement from her, or from me. It was a way for me to think about her, and how I respect her.”

‘The idea was to change Pirelli’: photographer Albert Watson’s 2019 calendar

Christine Ford Presents ‘Inspiration’ Award, Even Though There Was No Evidence To Back Up Her Claims

When Barr Drops The Hammer Will Democrats Turn on Obama?